Spanning the rolling hills of Vermont’s Champlain Valley and easternmost Washington County, New York, 300-acre Consider Bardwell Farm was the first cheese-making co-op in Vermont, founded in 1864 by Consider Stebbins Bardwell himself. A century later, Angela Miller and Russell Glover are revitalizing the tradition with goat milk from their herd of Oberhaslis and cow milk from their two neighbor farm partners—the Brooks and the Browes. Rotational grazing on pesticide-free and fertilizer-free pastures produces the sweetest milk and the tastiest cheese. All cheeses are made by hand in small batches from whole, fresh milk that is antibiotic and hormone free. Only microbial (non-animal) rennet is used in the cheese making. All of the cheeses are aged on the farm in an extensive system of caves. 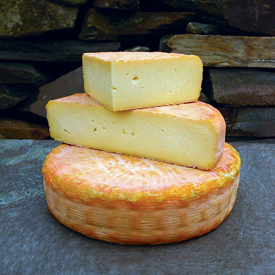 Dorset is a washed-rind, raw Jersey cow cheese with a rich, buttery texture and seasonally influenced pungency. Earthy and complex with a beautiful basket weave rind, Dorset is a savory, nutty and earthy delight that is perfect for cool weather; great on a cheese plate and useful in the kitchen—here’s a few ways to use it!

1. Cook the maple bread in two batches: Heat a large, heavy skillet over medium heat and, when hot, add ¼ cup of the maple syrup, 1½ tablespoons of the butter and a pinch of salt. Add 4 slices of the bread and immediately flip to coat in the buttery maple syrup. Cook, flipping often with a butter knife, until the bread is lacquered with the syrup and takes on a toasted look and the bottom of the pan is coated with just a dry film, about 4 minutes.

2. Transfer the maple bread to a lightly oiled plate to cool. (Repeat the process with the remaining pieces of bread.)

3. Smear a slice or two of Dorset into the bread and serve immediately. 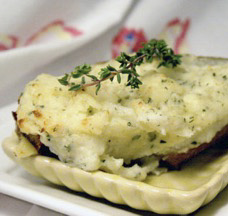 salt and pepper to taste

1. Prick the potato skins 5 or 6 times with a fork so steam will escape, and bake for 45 minutes to an hour, or until a table knife inserted slides out easily. Set aside until cool to touch.

2. Cut potatoes in half lengthwise and gently scoop out centers into a medium-sized bowl, leaving a little flesh behind and trying not to break the skin. Add the cheese, sour cream, butter and herbs to the bowl and mix well. Salt and pepper to taste.

3. Spoon a quarter of the potato mixture into each potato skin. Bake for 15 minutes, until golden brown. Cool for 5 minutes and serve. 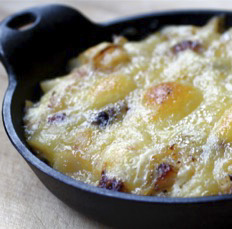 A rib-sticker if there ever was one!

salt and pepper to taste

1. Place the potatoes in the pot, cover with water, and bring to a boil. Cook for about 20 minutes, or until the potatoes are easily pierced with the knife. Remove from the heat, drain, and let sit until they are cool enough to handle. Cut the potatoes into small chunks and set aside.

2. In the sauté pan, cook the bacon over high heat until browned. Drain, leaving 1 tablespoon of fat in the skillet and add the onion. Cook over moderately high heat for about 5 minutes until golden brown then add the bacon and wine and cook for another 5 minutes, stirring occasionally.

Add the flour, salt, and sugar to a food processor and pulse to combine. Add the butter and pulse until the butter is finely chopped and the mixture resembles coarse meal. Add the mascarpone cheese and lemon juice and pulse a few times. Add the ice water and run the machine just until the mixture is moist and crumbly, but does not form a ball. Do not overmix. Turn the dough out onto a sheet of plastic wrap. Press into a disk, cover, and refrigerate for 30 minutes.

Put an oven rack in the lower third of the oven. Preheat the oven to 375°F. In a medium bowl, combine the apricots, walnuts, lemon zest, cinnamon, and sea salt. Add the honey and stir until all the ingredients are coated. Stir in ⅔ of the cheese.

1.Cut a piece of parchment paper to fit inside a 12 x 17-inch baking sheet and put it on a work surface. Put the chilled dough on the parchment paper. Roll the dough into an 11-inch circle, about ¼-inch thick. Lift the parchment paper and transfer it to a baking sheet. Put the apricot filling in the center of the dough, spreading evenly, leaving a 2-inch border. Fold the dough border over the filling to form an 8-inch round. Pleat the edge of the pastry and pinch to seal any cracks in the dough. Arrange the remaining cheese on top of the filling.

2. Using a pastry brush, brush the crust with the beaten egg. Bake until the crust starts to turn golden, about 15 to 18 minutes. Cover the crostata loosely with a piece of foil and cook until the crust is golden and the cheese has melted, another 12 to 15 minutes. Remove the crostata from the oven to a cutting board and uncover. Cool for 10 minutes, then cut into slices and arrange on a serving platter. Serve while still warm.

Grab your mixing bowls, measuring cups, and your k

Sending 🧡 to all our local farmers, producers,