Is there anything more comforting in March? 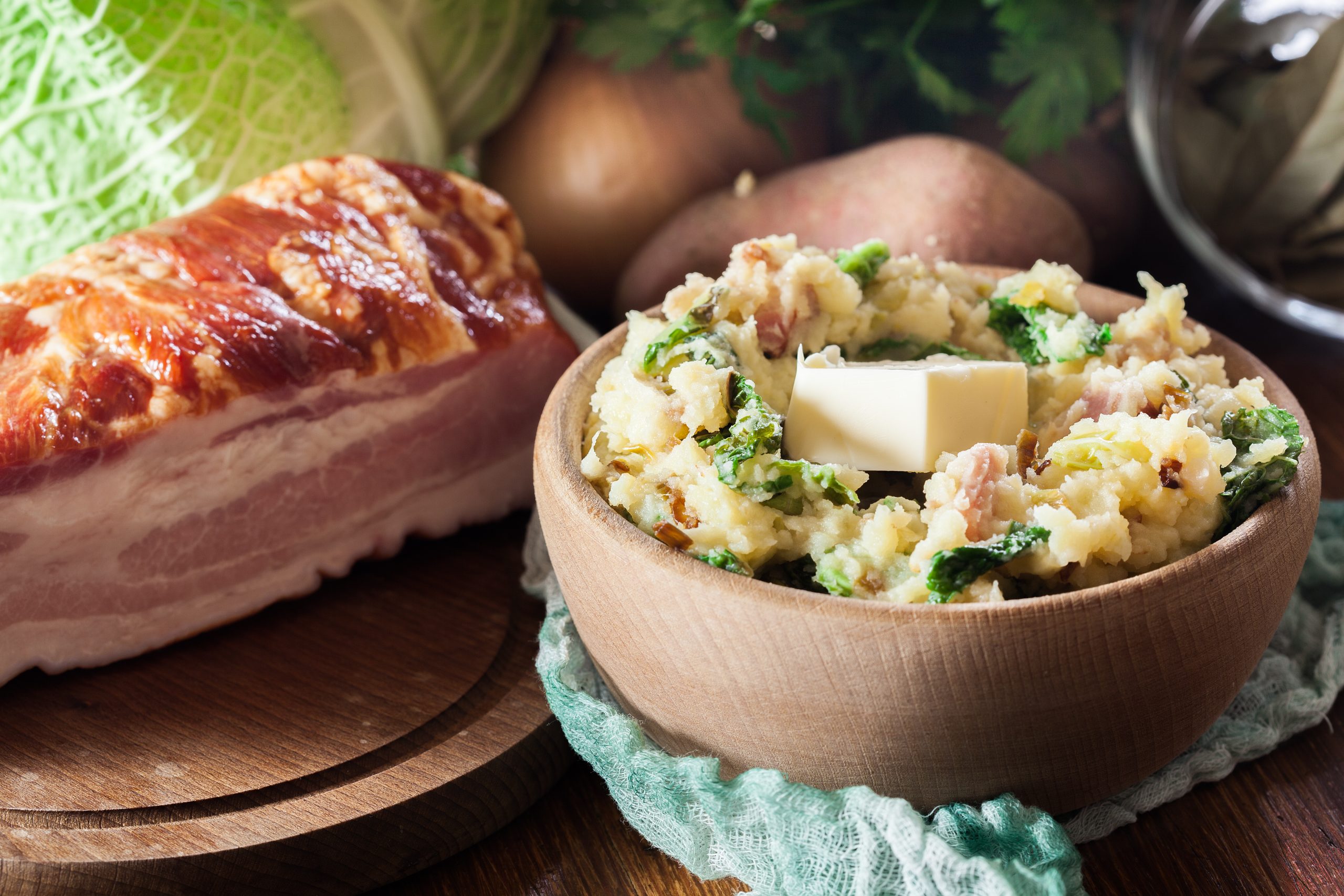 St Patty’s Day is upon us, that time when we claim our Irish Heritage. My interest goes deeper than heritage or the nutritional value of the ingredients. Who can resist the gastronomic pleasure of comfort foods with names like that! Irish Colcannon is a delicious mashup of potatoes, cabbage, or kale, and lots of butter with some scallions or chives thrown in. Scottish Rumbledethumps are a mash of potatoes (natties), swedes (Swedish turnips or “neeps”), cabbage or kale, and then baked with cheddar cheese. Both are often flavored with onions or leeks. Interesting that these two popular dishes rely on ingredients that are not native to either Ireland or Scotland.

It is notable that Ireland and Scotland had a dearth of native fruits and vegetables. In ancient Ireland, there were strawberries, tiny green plums called “sloes”, the whortleberry, and hazelnuts. Wild onions, leeks, and cabbages were more herb-like in their early form, and they, along with wild parsnips and carrots were mentioned in early writings. “Cabbages” were most likely what we would recognize as kale, and indeed was called kale in Scotland. Over time these wild plants were cultivated and grown in an enclosed space, close to homesteads. Other native food plants included nettles, watercress, and the sea-plants dulse and red seaweed. Red seaweed has been used for many hundreds of years as a thickener and to make sweet puddings. Today it is better known as the much-maligned carrageenan. Barley shows in up ancient literature in both Ireland and Scotland. Worth mentioning is that many similar plants sprung up in multiple places around the globe. It is the various ways in which they were cultivated in different climates and soils that produced the many varieties we have today. Not every plant has just one place of origin.

Potatoes, as we know, originated in the Andes Mountains. Historians at University College Cork believe they came to Ireland by way of Spain around 1587. It is unclear who introduced it as a food crop in Scotland, but potatoes are noted as a food consumed by the upper echelons of Scottish society by 1600. Most of us are familiar with the Irish Hunger, caused by the blight, but if you are unfamiliar with the Scottish Highland Potato Famine that occurred during the same time, I invite you to take some time to read about it. The contrast in government approaches to providing for its citizens during those pandemics is rather shocking.

“Swedes” are how Scots and Irish distinguish between the more bitter but more delicate white turnip and the sweeter, hardier Swedish Turnip, or “neeps”, which is botanically a hybrid of the pungent white turnip and a type of cabbage. Swedish turnips are what we know in America as rutabagas, those waxed, purple, and cream-colored globes dallying among the winter squashes in the produce aisle. They are nutritional powerhouses that cook up with a sweetness and a golden hue. They are believed to have originated in Eastern Europe and were first introduced as a food and animal feed crop in Scotland in the 1790s, larger in size, easier to grow, and a much hardier storage crop than the smaller white turnip preferred by the gentry and the French. The introduction of the Swedish Turnip is credited for changing agriculture in Scotland.

Colcannon and Rumbledethumps are simple fare. Quantities and step-by-step attention to details are not needed! Use up left-over mashers, or simply cook up cubed potatoes and smaller-diced rutabagas in the same pot until both are tender and mashable. Cook up or add some left-over cabbage or kale, mash it all together with some good Irish butter, and toss in some bits of onions or leeks, scallions, or chives. Colcannon is traditionally served with more butter; Rumbledethumps have the added step of baking the mash-up with a sprinkle of Scottish Cheddar until heated through.

Colcannon is often served at Halloween in Ireland, and Rumbledethumps accompanies haggis on the menu for Burns Night Supper, and both have more recently been elevated to gourmet peasant food promoted by foodie chefs in Scotland and Ireland. I encourage you to bring these comfort foods to your table often . . . and in celebration of St Patty, please indulge in some Irish butter!

Cynthia Knipe is a Registered Dietitian-Nutritionist with What Nourishes You, LLC, based in Keene, NH. She looks forward to the day when we can gather again for Monadnock Food Co-op’s Wellness Workshops.

Join our 3700+ Member-Owners and community members who want to stay up to date on the latest sales, news, and much more!

What better time to get your bicycle out of storag

The SpringTruckload Sale begins Friday at 10am! Sa

What's on sale today and tomorrow? Come on over to