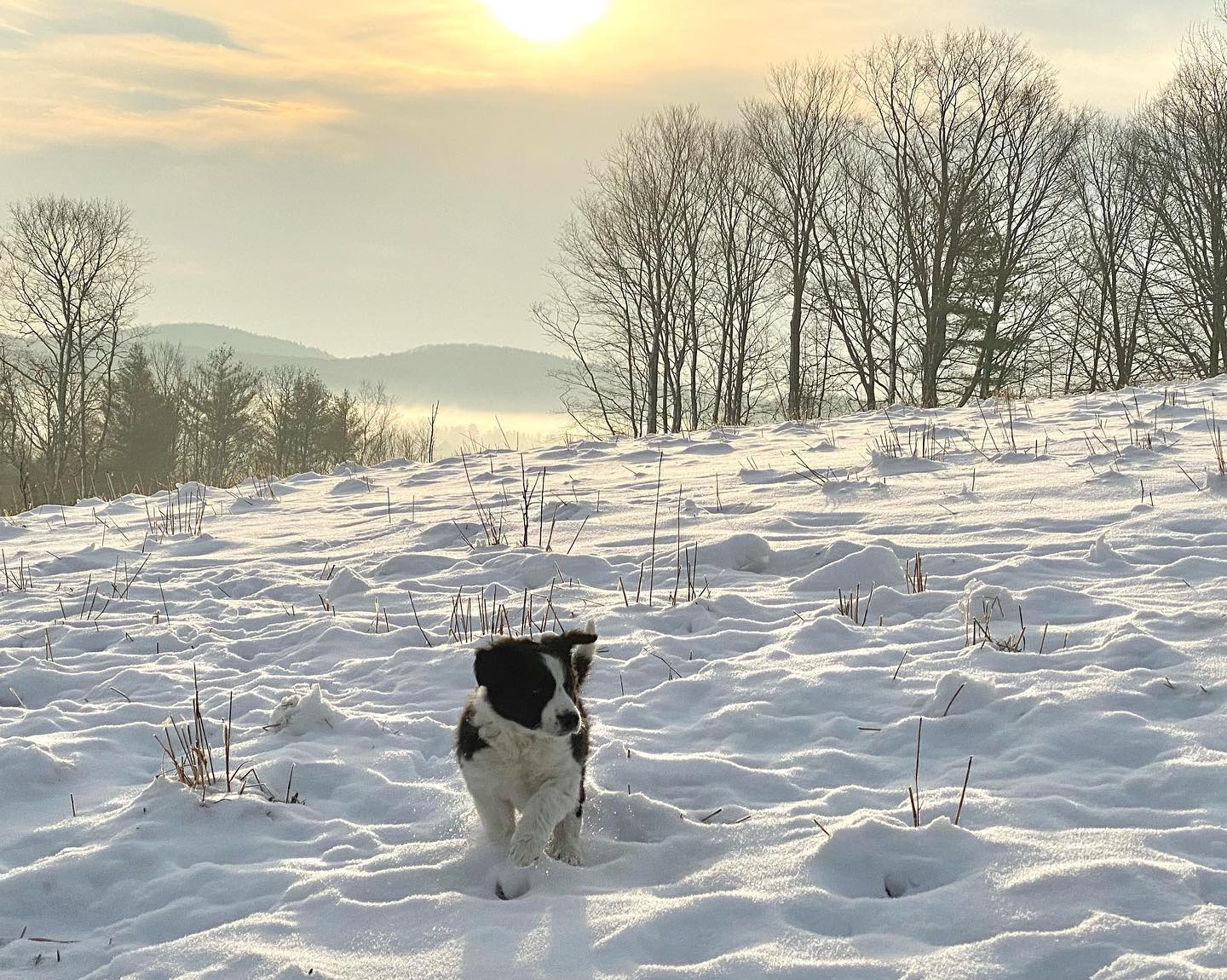 I love shining a light on all the farmers and producers who provide a bounty of local food and other locally made products to our community. In this article, however, I move the spotlight over and down, from the businessperson to their four-legged friends — the working dogs, cats, and other animals who also make these local products possible. Our first Four-Legged Farm Friend Feature of 2021 highlights the dogs at Five Sigma Farm in Sullivan, NH.

Farmer Milton Trimitsis has a hard-working canine crew that includes Ze’ev, Luc, Cass, Becq, Bravo, Fanny, Sandy, Athena, and Zorbá. “Here, with my team of working dogs, I raise lamb on lush, rotationally-grazed pastures,” Milton shared. “The sheep and chickens are protected by my livestock guardian dogs so they can focus on grazing without fear of predators. And my border collies work with me to gently manage the animals as they move from field to field.”

During the winter, the border collies hold the flock while Milton brings out feed bales with his tractor. When it’s time for an auction, the dogs drive the sheep into a handling system so Milton can sort through who will stay and who will go. Summer brings a different set of chores. The flock needs moving twice a day to graze at various fields spread out among his neighbors’ land. “We walk the public roads to access the different fields,” Milton added.

No matter the season, the farm’s guard dogs keep up their guard. They protect the farm’s flock from predators by barking and scent-marking the territory. Ideally, they don’t attack intruders but deter any unwanted guests from approaching the sheep and chickens. “We have bears, bobcats, coyotes, and foxes,” said Milton. “Our neighbors lost half their chicken flock to predators, but none were lost on my farm.”

As individuals, each dog has its own job preferences. “Cass likes to work in the handling system, and Becq likes to move the lambs,” Milton shared. “Cass hates lambs – they make her uneasy. She has no problems with the rams, though.” However, no matter the job, they’ll get it done.

When I asked Milton about the dogs’ unique names, he shared, “I like to encourage thinking in the dogs.” For example, Cass is named after Cass Sunstein, a constitutional law professor and a proponent of animal rights. All I can say is their names definitely got me thinking!

One of Milton’s favorite stories about the dogs is the day he absentmindedly turned his back on the rams, bending over to open the fencing. As he bent, one of the biggest, meanest rams set his sights on making Milton his target. Cass saw the story unfolding, and the 35-pound dog ran from the other side of the field and rammed the 225-pound ram, saving Milton from a knock-out. “Cass had never done that before,” Milton gratefully shared. “It’s an example of how a good herding dog is always thinking and acting independently.”

“People ask why not just get human helpers?” Milton closes out our discussion. “Eight helpers couldn’t replace one of them. The dogs help with moving the sheep makes all the difference in working efficiently – or else I’d spend my whole life chasing sheep! Without them, I couldn’t do it.”

Know of a farm animal I should highlight in a future article? I’d love to hear from you! Please email me at marketing@monadnockfood.coop.

Join our 3700+ Member-Owners and community members who want to stay up to date on the latest sales, news, and much more!

What better time to get your bicycle out of storag

The SpringTruckload Sale begins Friday at 10am! Sa

What's on sale today and tomorrow? Come on over to

Home » News » The Four-Legged Friends Behind the Co-op’s Products: The Dogs of Five Sigma Farm